The Neuroimaging (NI) Core provides training and consultation in performing state-of-the art neuroimaging and EEG methodologies to support NM4R research. The NI Core features senior faculty who provide consultation and training as to the optimum imaging methods for both acquisition and analysis including multiple modes of structural and functional imaging relevant to rehabilitation research, such as BOLD, DTI, DKI, fMRI, MRS, and resting-state connectivity. Several categories of localized brain information generated via imaging can be collected and analyzed, e.g., tissue volume, stroke pathology, correlates of basal metabolism, local estimates of cellular complexity, regional responses to localized brain stimulation from TMS and their corresponding functional responses.

An innovative feature of the NI Core is the development of capabilities to capture multiple modes of data in conjunction with neuroimaging data, e.g., development of devices and algorithms for more accurate measurement of physical function/movement with the subject inside the scanner. Notably, MUSC investigators were the first in the world to image TMS in the scanner with fMRI. This technological skill provides a rare ability to observe in patients the brain regions most affected by the different stimulations and identify the most relevant areas involved in therapeutic response.

Dr. Brown is Scientific Director of the Center for Biomedical Imaging (CBI) at MUSC with responsibility for the operation of its two MRI instruments – a human 3T scanner and an animal 7T scanner. He has more than 30 years of experience overseeing MR Centers directed toward the application of magnetic resonance to studying physiology in both animals and humans. He is particularly interested in integrating different modalities with MRI such as transcranial magnetic stimulation (TMS) and electroencephalography (EEG). He has been Principal Investigator on more than 10 major NIH grants for both the development of MR technology as well as its application in cancer and other diseases. He has published greater than 180 peer-reviewed papers.

Training and consultation opportunities are available to learn the following imaging techniques of relevance to NM4R investigators. 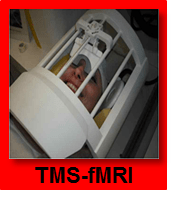 Training and consultation in simultaneous TMS-fMRI is available for NM4R researchers. It has been available to the research community at MUSC since 1998. In fact, NM4R Scientific Director and BSTIM Core Director Mark George was the leader of the first group to be able to perform TMS within an MR scanner. MUSC has built a custom system involving a special TMS capacitor, custom filters to stop transmission of RF noise into the scanner, special coils and cables, a Lucite TMS holder within the scanner and a custom built large RF coil that allow easy placement of the TMS coil. A special purpose 10-channel head coil has been constructed to allow the simultaneous acquisition of MR images and application of TMS inside the scanner. The MR coil must be larger than standard coils to allow the TMS coils and support structures to be close to the head. This system is now fully integrated within the MRI environment and is coordinated with scanner acquisition. This system allows direct imaging of the transynaptic effects of TMS at a cortical location. Currently, about a dozen labs around the world are able to stimulate with TMS directly within the scanner in a truly interleaved manner. NI and BSTIM Core faculty and staff are in frequent contact with many of these other laboratories to improve and refine this exciting technique. We believe simultaneous acquisition allows investigators to probe the mechanisms underlying the success of TMS, aiding therapy in the functional recovery from stroke. 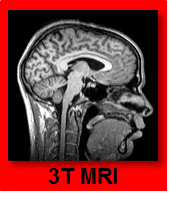 MPRAGE is primarily a T1 weighted imaging sequence. Because it is not a steady state sequence, the actual contrast in the image is complex. However, it provides excellent anatomical 3D images with good gray/white matter contrast. These form the anatomical basis for subsequent analysis, particularly for Voxel Based Morphometry (VBM) and fMRI. Specific acquisition details are bandwidth = 90 Hz/pixel, flip angle = 7°, TR/TE/TI = 2.73s/3.44ms/1s, acquisition time 6.5 min. Resolution is 1x1x1 mm3. Further analysis can be carried out using FSL to recompute needed 3D reorientations, calculate fMRI images and VBM maps, etc. This imaging sequence can be used by NM4R investigators to observe the brain anatomy of individual subjects and if/how it changes over therapy and with neuromodulation. 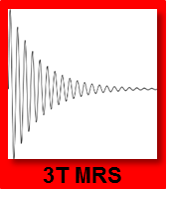 PRESS is a method to measure metabolite levels in brain regions of a few cc. Using methods to suppress the large signal from water protons, the signals from the protons on metabolites (typically 10,000 times smaller) can then be detected. The anatomical MPRAGE image can be used for 1H-MRS voxel placement and tissue segmentation. The voxel for PRESS can be placed on MPRAGE images, contralateral to the lesion, with the sides of the voxel parallel with skull. A voxel size of 2 x 2 x 2 cm3 is selected. Following auto-shimming, single-voxel water-suppressed 1H-MRS spectra can be acquired with a Repetition Time (TR) = 2000 ms; Echo Time (TE) = 40 ms; number of averages = 256); an unsuppressed water spectrum will be co-acquired (TE = 40 ms, number of averages = 16), scaled for partial volume effects and relaxation, and used as a concentration reference. This sequence has been shown to perform superiorly to other PRESS sequences (TE = 30 ms, 80 ms; TE-averaged) for imaging glutamate. MRS analysis can be conducted using LC Model 6.2, an operator-independent curve-fitting software package that uses least-squares estimation for quantifying metabolite concentrations; the basis set for TE = 40 ms is provided by the vendor and includes myo-inositol, gamma-aminobutyric acid (GABA), lactate, taurine and aspartate, creatine, glutamine, glutamate, N-acetylaspartate (NAA), N-acetylaspartate-glutamate (NAAG), and choline (Cho). Glutamate resonances are historically challenging to isolate. It has been recently shown glutamate can be measured with a similar level of reliability as NAA using TE = 40 ms at 3T). Unfortunately, a TE = 40 PRESS sequence is not suitable for imaging GABA because GABA resonances are overshadowed by nearby creatine and choline peaks. To overcome this, investigators can use the MEGA-PRESS J-editing technique that has been shown to be reproducible. This sequence (TR = 2000 ms; TE = 68 ms; number of averages = 256) alternately applies a frequency-selective editing pulse at 1.9 ppm and 7.5 ppm, in an interleaved fashion; subtracting these produces a well-resolved GABA peak. We have created a basis set for GABA for LC Model analysis

DKI is used to estimate white matter tracts and the microstructural complexity of different regions in the brain. 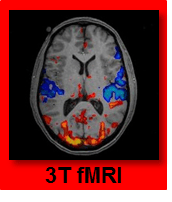 DKI is an advanced diffusion-weighted imaging technique. In brain tissue, water molecules move randomly at the molecular level. However, as they come into contact with cell membranes and other organelles, their effective motion can be markedly anisotropic and non-Gaussian, unlike what is seen in free water. The degree of non-Gaussianity is sensitive to how far the molecules can move without interference, so it measures molecular behavior related to the local cellular complexity.9-11 Similarly, the level of anisotropy measures how easy it is to move in one direction compared to another. All of this can be explained in mathematical terms by using various tensor quantities, the simplest of which is the 2-rank diffusion tensor that is the basis of diffusion tensor imaging (DTI), which describes the directional dependence of the diffusivity. To describe the longer range displacement of the water, we must use a rank 4 tensor to both describe how far the water moves and how that changes with direction. This tensor is called the kurtosis tensor; thus, the name for this procedure is diffusional kurtosis imaging (DKI). In biological tissues, an elevated diffusional kurtosis, as measured with DKI, typically reflects a higher degree of intra-voxel diffusional heterogeneity, which is an indicator of microstructural complexity. These two tensors can be measured in MRI by applying gradients in various directions and at various strengths before acquiring the image. While measuring the DTI tensor only requires 6 directions and a single level of gradient strength (in addition to an image with no gradient), DKI requires the use of at least 15 different diffusion gradient encoding directions and two levels of gradient. A typical DKI imaging protocol would use 30 diffusion gradient encoding directions with b-values of 0, 1000, and 2000 s/mm and would require approximately 5 to 8 min to acquire (TR/TE = 5.5 s/99 ms; resolution = 3 x 3 x 3 mm³; FOV = 222 x 222).

Typical metrics obtained with DKI include the mean kurtosis, axial kurtosis, and radial kurtosis, which are analogs of mean diffusivity, axial diffusivity, and radial diffusivity commonly derived with DTI. It should be emphasized that DKI also computes the conventional DTI parameters and typically improves their accuracy. In total, DKI provides 21 distinct physical quantities, as compared to the 6 that DTI yields. This extra information not only better characterizes the diffusion properties of a tissue, but also allows for substantially more comprehensive modeling of the tissue microstructure than is possible with DTI. Analysis is done with ‘in house’ developed software. The tissue microstructural modeling produces tissue microstructure maps that will be calculated as follows. First, motion correction is performed with a six-parameter rigid-body transformation to spatially align all diffusion-weighted images. Then the diffusion and diffusional kurtosis tensors are jointly fitted to the diffusion MRI signal measurements for each voxel. Finally, DTI and kurtosis tissue microstructure measures for the voxel are calculated from the tensors.

Voxel Based Morphometry is used to quantitate changes in cortical thickness or structure.

The National Center of Neuromodulation for Rehabilitation is now accepting requests for all our training, consultation, and collaboration services through MUSC's South Carolina Clinical and Translational Research Institute SPARC Request system. This system allows us to accept, track, and fulfill requests efficiently, and will help us to serve you better. Please email Chris Schachte for support with creating your request.